The mission of the Hampton Roads Criminal Justice Training Academy is to furnish the highest achievable level of professional criminal justice training and other related services to our partner organizations.

"Before everything else, getting ready is the secret of success"
-- Henry Ford -- 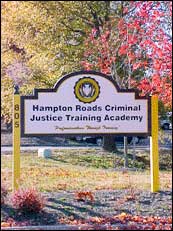 In 1977 the State of Virginia mandated training for jailors, court security officers and civil process servers. PACJ provided this newly mandated training. Regional sheriff departments joined the Academy so that their officers could be trained in these very specific disciplines.

In 1981 the State reduced funding causing several regional criminal justice training academies to close and the remaining academies' boundaries to be enlarged.

At that time several criminal justice agencies from Tidewater joined the Academy. The Academy's name was changed again to Peninsula/Tidewater Academy of Criminal Justice (PTACJ). The original charter was revised and the Portsmouth Police Department became a charter member of PTACJ.

In 1984 the Academy moved to a new location on Thomas Street in the City of Hampton. At that time the name of the Academy was changed again to the Hampton Roads Regional Academy of Criminal Justice (HRRACJ). This name better reflected the Academy's service area.

HRRACJ remained at it's Thomas Street location until 1996. In 1996 a partnership was established with Christopher Newport University (CNU) and HRRACJ relocated to Ferguson Hall on the campus of CNU.

In 2000 the Academy Charter was dissolved and a new Academy Agreement was ratified. The Agreement opens up Board Membership to any member signing the Agreement. Again, the name of the Academy was changed to the present name, Hampton Roads Criminal Justice Training Academy. The last name change was done to comply with State code.

The Board approved the building of a new facility in November of 2000. A groundbreaking ceremony for the new academy building was held in February 2001. The new academy opened in August of 2001, was formally located at 805 Middle Ground Blvd in Newport News, Virginia 23606. The location of the building is the same but, the street has been renamed to 805 City Center Blvd, Newport News, Virginia 23606.